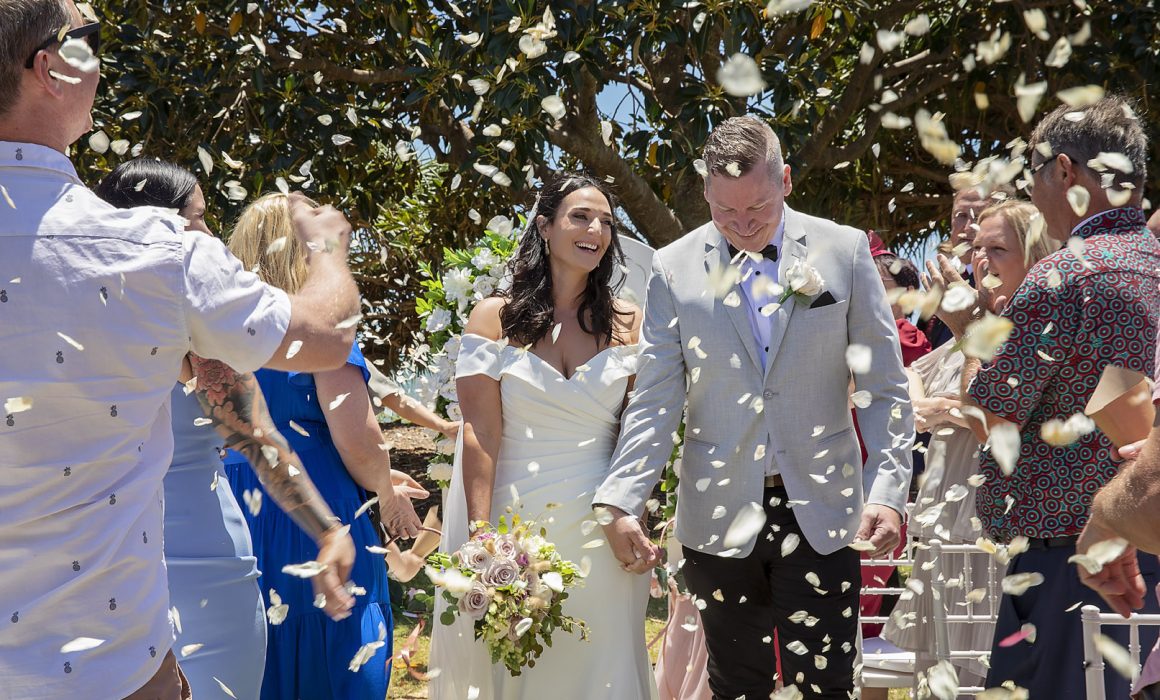 After all the nerves and build up before a wedding day, it’s smiles like this that show the pure bliss of the moment.

We love a (biodegradable) petal toss!

After an early morning hair and makeup appointment, Kyla was chauffered to her ceremony at Raby Bay Foreshore by Kandid Kombi. Her flowers were by Little Miss Flower Shoppe. Kyla walked down the aisle to an acoustic version of,”Say you won’t go” sung by guitarist, Simon Meola.

Kyla and Josh requested a classy but relaxed ceremony, and gave Cheryl Landsberry – Marriage Celebrant a few dot points about their meeting.

“Kyla and Joshua first met against the odds, as they were separated by 5,000 kilometres. Kyla was studying at the University of Queensland, and Joshua was working away in the town of Onslow, Western Australia, in the Pilbara region. And they both swiped right.

Joshua and Kyla made a connection quickly, texting and chatting every day. But Kyla was quick to point out that she wasn’t interested in a long distance relationship, so friendship might be the best option.

Not one to back down or admit defeat, Joshua promptly threw himself off a scaffold to ensure a one way ticket home to Kyla, and never left her side again – so Kyla tells the story.”

Photos by Sylvie from Papillon Studio

Kyla and Josh enjoyed a lunchtime reception at Fiction Bar & Restaurant at Raby Bay Harbour, which was followed by a cruise on the bay.

Thanks to the team at Elope Brisbane for another seamless event.