The dream was for a tropical wedding ceremony on a white sandy beach, followed by a balmy reception under the stars. Glammed up guests could dine and dance barefoot beneath the fairy lights. Sounds ideallyic, doesn’t it? And you would think in Queensland, that a beach wedding would be a year-round possibility.

However, on the wedding eve, with bad weather predicted, the groom gathered together his crew to assemble a sturdy marquee as a contingency plan. They kitted out a smaller marquee for the caterers, and hooked up a generator to power the lights and stoves. Plans for a night out sinking a few cold ones were put to the side as the trusty band of volunteers worked late into the night stabilising the setup. Groom, Adam, decided to forgo a comfy bed and sleep out at the site overnight to guard the paraphernalia, and was kept company by his groomsmen.

The next morning, they awoke to stormy skies, and the prediction of a downpour. I met up with bride, Lin, as she was having her hair styled in an apartment overlooking the ocean. Lin was pragmatic, and although disappointed that her wedding dreams had been dashed, she kept her eyes on the prize and focussed on marrying the man she planned to spend her life beside.

As per the forecast, rain dropped from the skies right on ceremony start time, so we huddled under the tarpaulins and listened to the newlyweds promise each other a lifetime of devotion. Luckily, the electrical equipment had been carefully protected from the elements, and the aroma of tasty treats soon wafted in from the kitchen marquee. I quickly learned the art of a well-placed umbrella prod to the roof of the sagging marquee to toss off the pooling rainfall. 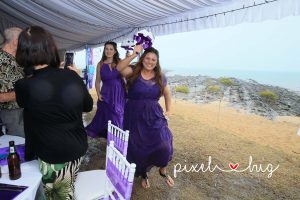 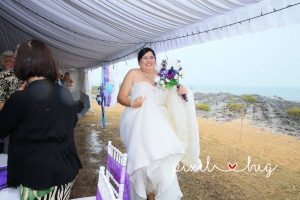 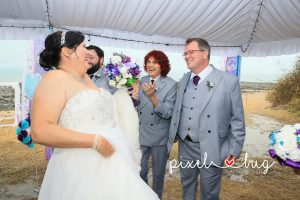 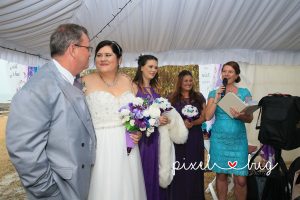 Once the guests were seated around trestle tables, and had eaten their fill, I opened the floor for the reception speeches. Bride, Groom, and family members spoke their genuine appreciation of all who had come together to create such a magical day. But the unexpected speaker of the night was a guest who had travelled from interstate to celebrate with the couple, who he had met while they were both travelling the country. This guest knew no other at the wedding, however, had been one of the willing construction helpers the previous day. While he was enjoying the wedding feast and party, that was not the highlight of the weekend. Instead, he told of the immense satisfaction and feeling of community that he enjoyed through contributing to the task of setting up the wedding site. Despite the inclement weather, despite the disappointment of dreams down the drain, despite the lack of expertise and implements of the random bunch, being a part of a team who all worked towards a common and benevolent goal was gratifying and rewarding beyond any traditional wedding guest experience. 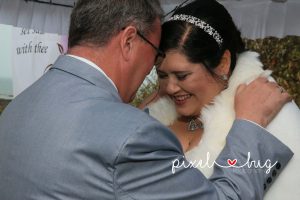 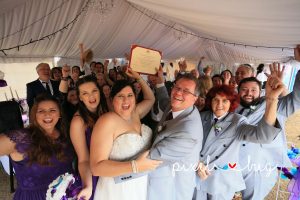 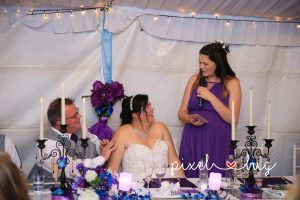 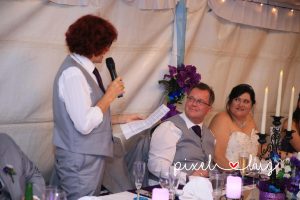 And then the rain cleared, the DJ spun some tunes, and the guests still danced barefoot in the sand beneath the fairy lights.