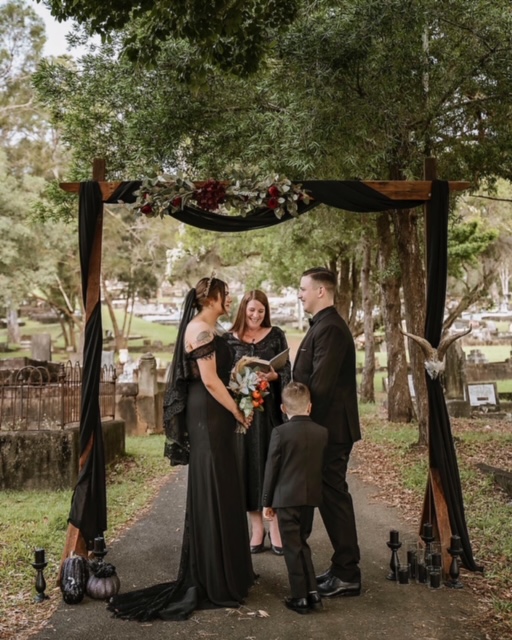 When is it OK to wear black at a wedding?

When it is Halloween.

Nicola had just about given up on online dating, but John caught her eye with his profile picture. He was on stage with his bass guitar, in a mid-air jump. And her heart skipped a little beat.

Soon they started chatting, and once he realised that Nicola could hold a conversation using Slipknot song names, John asked Nicola to meet him for coffee. He arrived to pick up Nicola from her home, a plan Nicola started second guessing after panicking that he could be an axe murderer. But she opened the door to a cute guy in Vans and a band T shirt, and Speed Dealer sunnies.

But, despite not having high expectations from an online date, Nicola and John ending up talking and laughing for six solid hours. They hardly noticed the time slip by, and both felt their instant connection.

The pair were soon inseparable, feeling like they had known each other for their whole lives. Their life was a rollercoaster of late night gigs, coffee runs, inappropriate jokes, and making each other laugh so hard they had tears running down their legs.

John said that he felt like he had found his best friend. And Nicola knew there was no one else she would rather spend time with.

Nicola and John knew they wanted to be together forever, but they also knew that a traditional white wedding was just not them. Which is why they contacted the team at Elope Brisbane .

Stylist Mel from Miss Weddings created an arbour with black draping. Celebrant Cheryl Landsberry worked with the couple to design a quiet and intimate ceremony respectful of the cemetery surrounds and found a black dress with Morticia sleeves from Dangerfield. Photographer Romana Saeheng Photography and Graphic Design filtered the photos to give a sombre vibe. Roses were placed on surrounding gravesites as a mark of respect.

John’s dad proudly escorted Nicola to the ceremony site to The Only Exception by Paramore. Nicola was striking in a black fitted dress with a black lace veil and a gold, Gothic crown which was actually made from cable ties! John was dashing with his hair combed down, wearing all black. Their two witnesses also dressed in top to toe black.

John promised, “I’ll always love you with all my heart -till death do us part.”

Nicola’s promise, “I will love you always and forever -I’m fatally yours” matched her tattoo.

This ceremony was one of the most heartfelt, sincere, and intimate ceremonies we have been involved with, and we will remember forever our time spent with John, Nicola, and their family.