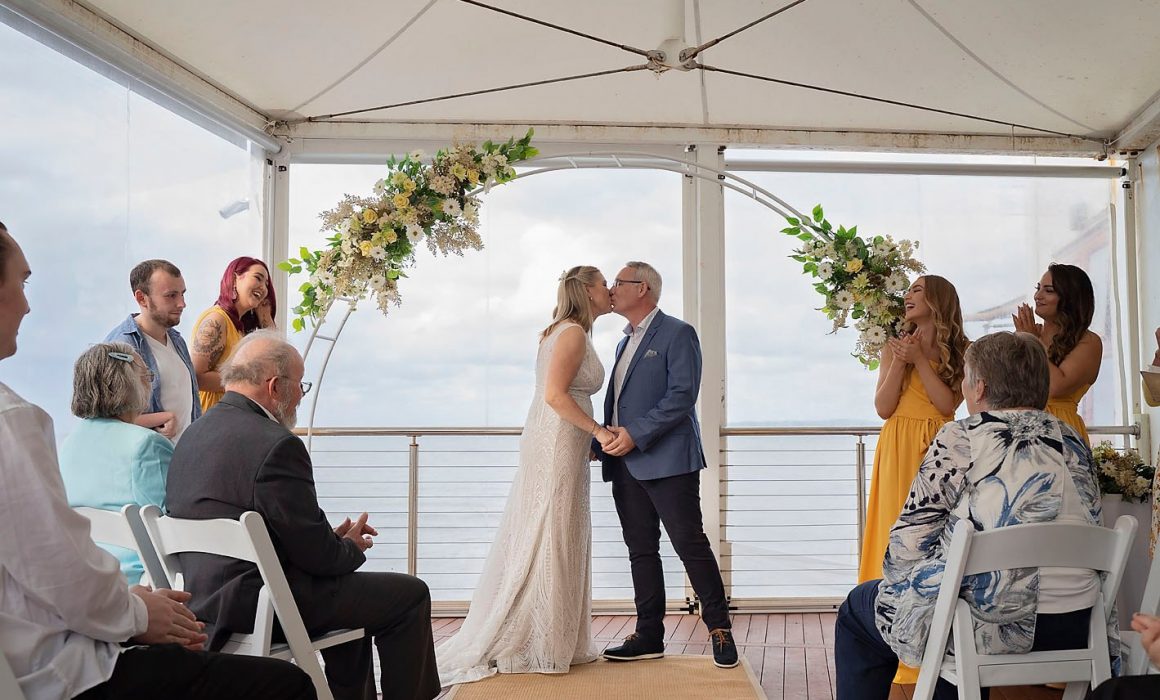 On their 30 year wedding anniversary, Joanne and Chris celebrated with a renewal of vows ceremony at The Lighthouse Restaurant at Cleveland Point.

They were blessed to be joined by their parents who made the trip out from the UK to join the celebrations. Joanne and Chris were accompanied by their 4 children, their proudest achievements, who are all now young adults. Their daughters wore sunny yellow dresses, and their son matched Chris in blue. Joanne looked absolutely stunning in a fitted, floor length white gown.

Steve from Kandid Kombi transported the ladies to the Lighthouse Restaurant in the cute orange Kombi. They walked into the venue to “You’re in my Heart” by Rod Stewart. Stylists Steph and Jodie from Beautiful Illusions created an arbour with yellow florals for the ceremony backdrop and adorable table decorations in matching yellow for the reception lunch. All the little extra touches created an atmosphere of the special occasion it was.

Back in 1988, Chris and Joanne first met in College. Chris was one of only 5 young men in a class of women, and so he had plenty of female attention. But it was Joanne who caught his eye, and he quickly set about asking her out on a date. Joanne had noticed this young man with a very bouncy hair style, and thought his ripped jeans showed off his very cute bum. She eagerly agreed to a date with Chris.

At the time, in 1989, the most popular songs were “Like a Prayer,” by Madonna, and “Wind Beneath my Wings” by Bette Midler. New Kids on the Block actually were the new kids on the block, and Paula Abdul, Janet Jackson, and Gloria Estafan all had dance tracks in the charts.   Ed Sheeran was not yet born.

After a Christmas Eve proposal, Joanne and Chris were married in 1992. The number one song in the UK charts on their wedding day was “Deeply Dippy” by Right Said Fred, so we played this song as Chris and Joanne signed a certificate of Renewal. Their mums were honoured to be witnesses.

Here’s to the next 30 years together!